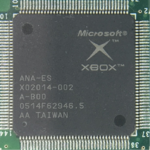 The Xbox 360 ANA (short for ANAlogical Device) is a video encoder chip used to transfer the GPU framebuffer into different video signals supported by the Xbox 360 such as composite, S-Video, RGB-SCART, component and VGA.

The Xbox 360 ANA chip was introduced in the XeDK era and was used in all board revisions (Internal and Beta) up to Xenon Retail. It was replaced with the HDMI supported HANA chip in Zephyr onwards.

There was a common misconception that the ANA chip was a hardware scaler that handled scaling the image to a 1080p format. User "Amir" from the Xbox 360 HDDVD department confirmed that the video scaling is all handled by the Xbox 360 Xenos GPU and that the ANA/HANA is only responsible for video encoding.[1]

The Xbox 360 ANA is a QFP144 soldered chip that was custom designed by Microsoft for the Xbox 360.

The HANA was first introduced with the Xbox 360 Zephyr motherboard design. The main differences between the older ANA chip being support for HDMI screens and the switch from a QFP footprint to a 225 pin BGA footprint. 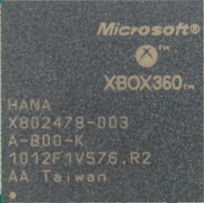