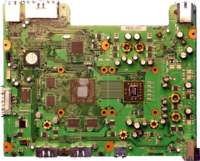 Falcon is the codename used for the third revision to the Xbox 360's motherboard. Appearing in September 2007, this revision reduced the CPU die size from 90nm to 65nm.

Opus motherboards started to appear in July 2008, to people who had sent in their RRoD Xenon consoles. The Opus motherboard is essentially a Falcon motherboard, without the HDMI connector, so that they could fit into the original Xenon cases they were shipped in.